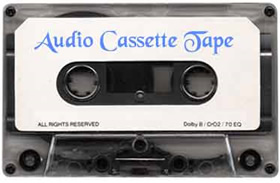 ‘Back in the day’ the cassette tape was a hugely popular format for pre-recorded music. From the early 1970s to the late 1990s, cassette tapes were widespread, along with the LP and then later the CD.

We first started producing audio hypnosis sessions back in 2002, we originally made them available on our website in CD and tape format. The tape format was discontinued by most major recording companies in 2002/03, but at the time we thought there might still be some demand. But I can count on the fingers of one hand the number of hypnosis tapes we sold back then. There aren’t many people in the world who own any hypnosis tapes produced by us, that’s for sure!

It wasn’t long before we stopped producing hypnosis tapes altogether and started offering our sessions in MP3 format, alongside our CDs. So it’s surprising how often we still hear people mention ‘hypnosis tapes’ when they talk about our products or hypnosis products in general. For example, the other week we received a really nice email from one of customers, in which they said:

“I just wanted to pass on thanks to you as I have found your hypnosis tapes highly valuable.”

I’m quite positive that they didn’t use one of our tapes from the early days, but we know what they meant because we get that a lot. We don’t mind when people mention tapes, because we love to hear from our customers. It’s just interesting how often we hear people still mention ‘hypnosis tapes’ long after we and most other retailers stopped selling them.

I decided to do some research on cassette tapes before writing this blog post. Did you know that that sales of pre-recorded music cassettes in the United States alone dropped from 442 million in 1990 to 34,000 in 2009? That’s quite a drop! If you’re curious to learn more then check out this website; the history of cassette tapes.

I know some people still look back fondly at the cassette tape, but to be honest we were quite glad to stop making them shortly after starting out back in 2002. And over the space of 9 years our MP3 hypnosis downloads now account for the majority of our sales, and we didn’t even offer this format ‘back in the day’ when we produced hypnosis tapes.

In case you’re wondering, people still like to purchase our hypnosis CDs – and we’re very happy to continue making them. Technology changes so rapidly and it’s just a matter of time before CDs become obsolete, but for now we’ll continue with them for as long as there’s a demand from our customers.