40% OFF FLASH SALE - Celebrate our 20th anniversary with 40% off your order. Simply enter the coupon code 20YEARS on the CART page to receive the discount. Limited time only.

A few years ago all of our self hypnosis programs were available in both MP3 and CD formats. But as we introduced new titles and updated older recordings, many became download only as we chose not to produce CD’s for them. It became uneconomical to have all titles available in CD format, due to slowing demand and minimum run requirements for printing CD covers, etc. With almost 90% of orders being download only, we would have been left with huge amounts of stock for a format that is now considered obsolete by many.

It might seem strange to some people that we are expanding our range of CD titles. Yet, despite the falling demand we know that a sizeable number of our customers still prefer CD’s. Our downloads are cheaper and instantly available, but whilst there is still demand for CD’s, we shall continue. For the foreseeable future at least. 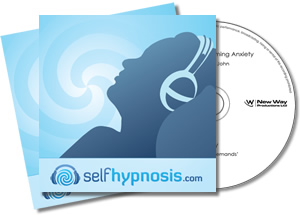 However, we cannot simply expand the range without some adjustment, due to the reasons mentioned above regarding stock control. So we have created a universal CD cover (cardboard wallet, as shown) which will be used for all newly available CD titles. This means we can keep relatively low numbers of CD’s in stock and use the same covers for all our titles.

Ideally we would love to have unique covers for all our titles, but with over 175 titles this is simply not viable any more. We still have a large number of unique covers, but once a title runs out of stock we shall switch to using our new universal covers. The name of a title will still be printed on the CD itself and there will also be a label on the back of the cover for easy reference.

Going forward we will also be producing the CD’s ourselves from now on. For the past 10 years we have outsourced CD production, but the gentleman responsible for our CD production very sadly passed away in November after a long and brave battle with cancer. His name was Roger and we shall miss him greatly. Bringing CD production back in-house was the only option for us, as we know nobody will do as good a job as Roger did. He was a good friend of ours I’m sure he would be happy to know that we are carrying on with CD’s for a little while longer.

Our website has just had a makeover! We are delighted with the new design, which has ...

We are pleased to announce the release of 10 new sessions by Barrie St John. The fol...