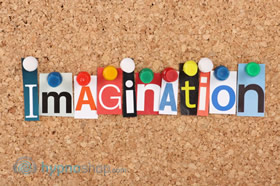 If you think you haven’t got an imagination or you feel you are not creative – think again! How do you plan events in your mind? Do you think about them, brainstorm them and write them down, talk it over, get the feeling and just do? Not think about it at all? Just do it?

Whatever you do, your mind and body are continually processing the forthcoming planned events, often without you even realizing. Maybe your stomach churns at the thought of a dentist visit or maybe you feel tired at the thought of all the work to do tomorrow?

If it’s an event which has some meaning to you, perhaps an interview, a meeting or a holiday, the process can be even stronger. Based upon your past experiences of handling such a situation, your body can react accordingly – it could get excited, give you a headache, stomach ache, etc.

For instance, a client with nerves about an interview came to see me. He was looking for employment and eager to get the job. By the time it came to the day of his interview he felt sick, pre-supposed the outcome was going to be awful, and generally felt anxious all day. My client’s plan had worked – he imagined what his day was going to be like (over and over again in the ‘backstage’ of his mind) and he succeeded in creating that dilemma.

My client couldn’t believe it when I explained to him that he was successfully hypnotizing himself to fail and have a bad day. I told him how wonderful he was at doing such a thing, in fact I suggested he was so good at using his imagination, he should have a go with one of our interview confidence self-hypnosis recording to help turn his negative process around and get a grip of just what his imagination is capable of doing for him in a positive and productive way.

Weeks later, after regular listening to his hypnosis download recording, my client told me of how much better he was feeling. Instead of getting himself worked up and anxious about interview, he planned what he was going to say and felt really prepared. And, he got the job!

When you listen regularly to your hypnosis download or CD recording, you can literally train your brain to work for you, not against you. Your imagination is such a wonderful tool; it is unique to you and there is no other like it. Why have it imagine a headache when, with practice, you can, imagine feeling comfortable and worry free. Try it, find out for yourself just how powerful your imagination is and put it to work, for you.

Creative Visualization and Self Hypnosis

Creative visualization is a technique that can help to create rapid and lasting chang...